* In case of any delay in receiving the OTP, you may verify it later. Please proceed without verification.

Enter your City name or Pincode

Kalagarh is a small town in the district of Pauri Garhwal in Uttarakhand. It falls under Kotdwara tehsil of this district. The Panchayat Samiti of Kalagarh looks after its administration. The place is particularly famous for its touristic attractions like Kalagarh Dam, Kalagarh Forest Reserve, and Kalagarh Gate to enter the famous Jim Corbett National Park. It touches the border of Uttar Pradesh. It comprises of two parts, Old Kalagarh town and New Kalagarh Colony. 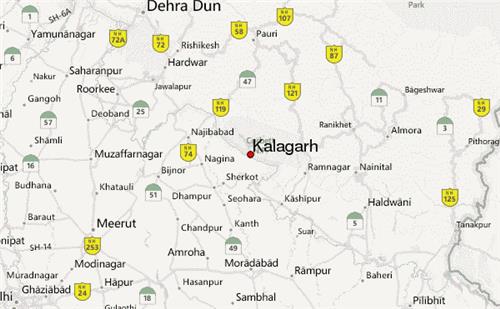 Kalagarh is a panchayat in the tehsil Kotdwara. It is fringed by other tehsils of Rikhnikhal, Pokhra, Ekeshwar, and Yamkeshwar. The overall population of this town is nearly 10,010. The civic amenities of this area are looked after by the Panchayat Samiti comprising of elected members from the local wards. It runs the government aided schemes in this region and provides all other basic facilities required by the people of Kalagarh.

Kalagarh is slightly uphill. As such, it experiences heavy rainfall, hot summers and cold winters. The temperature in summer season may go high up to 40 degrees in this town while winter experience fall in mercury with temperature in the range of 4 to 20 degrees Celsius. Rainfall may be heavy in this region during the monsoon months. October to March is the best time to visit this area to enjoy its natural beauty and sightseeing. Most of the tourists visit Kalagarh during this phase of time only.

Since Kalagarh touches the boundary of Jim Corbett Park, it is an excellent tourist destination in itself. The city is adjacent to Ranmagar which has all sorts of accommodations and travelling facilities for the tourists. The main attractions attached to this small town are Kalagarh Dam, gate to the reserve and Kalagarh Forest Reserve.

The dam in Kalagarh built on Ramganga River is the largest earthen dam of the entire Asia. This dam is the integral part of prestigious Ramganga hydroelectricity and irrigation project. It was constructed over the period from 1961 to 1974 as an embankment dam. Apart from generation of electricity, this dam also serves recreational purposes as a favourite spot for sightseeing. It is a paradise for bird watchers and natural lovers.

Kalagarh is one of the most accessible entry points of Jim Corbett National Park. From this gate, you can get entry for Jhirna and Dikhala Forest ranges. It is located midway of Ramnagar and Kotdwara. It is situated in the vicinity of Kalagarh Dam. From this gate, you can have easy access to the canter ride into the wilds of Corbett National Park. The gate remains open for entry throughout the year with only exception in the season of heavy rainfall. However, the entry timings change as per the season.

This forest reserve covers nearly 301 sq km of land. It is located near Jim Corbett National Park which makes it a popular destination for adventurous tourists. This reserve is a natural paradise laden with sal and sheesham forests. It is a hilly region with elevation of 813 meters above the sea level at some places. It has more than 550 species of avifauna and 50 species of mammals.

This forest reserve has a rest house of Forest Department. You can be accompanied by armed guards to explore this region on foot. Near the rest house, there is a wide stream of water with greenery on its banks. It is the ideal spot for bird watching. Here, you can catch glimpses of yellow backed sunbird, bulbul, grey hornbills, barbets, flycatcher, kingfisher, eagles, wagtails, etc. 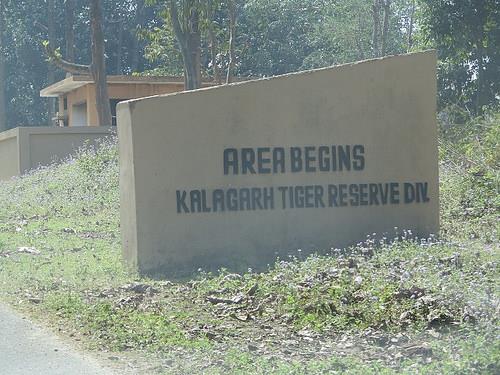 The fauna of this reserve is dominated by elephants along with other wildlife species like sloth bears, deer, goral, sambhar, hog deer, porcupines, cheetal, tiger, langurs, etc. This serene forest reserve is has another wildlife reserve called as Sonanadi Wildlife sanctuary located quite nearby. This sanctuary has some of the most exotic tree species.

It is very easy to reach Kalagarh from the adjacent cities of Ramnagar, Kathgodam, and Kotdwar. If you prefer traveling by air, Pantnagar Airport is the nearest aerodrome for Kalagarh. It is situated at a distance of 50 km from this town. Another option is Jolly Grant Airport in Dehradun.

The nearest railhead to reach the small town of Kalagarh is Kotdwar and Kathgodam. Ramnagar Railway Station at a distance of 78 km is also quite convenient to reach this place by the rail route. 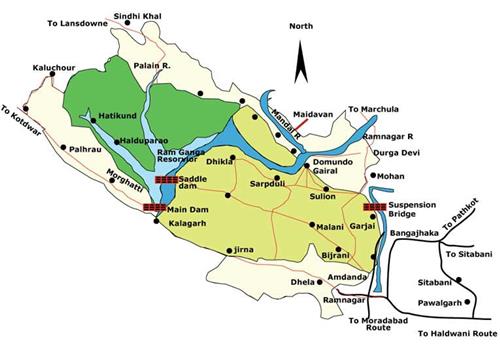 Reaching this city by roads is the simplest thing that you can do. You can take the route from Delhi to Kalagarh or from any other major city of Garhwal region to reach here. Government buses, private coaches, and taxis/ jeeps are easily available from cities like Haldwani, Ramnagar, Kathgodam, Kotdwar, etc. to reach Kalagarh at regular intervals.

Since Kalagarh is a small place with lesser infrastructure, it is not easy to find too many banks here. State Bank of India, SBI has established its one branch in this town. This branch offers the complete banking solutions to the people and visitors of Kalagarh.

Kalagarh is a remote region basically visited by the travellers going to Jim Corbett National Park. The area lacks many contemporary communication means. As such, post office is the only medium of connectivity for many interior pockets of Kalagarh. This post office offers all the requisite services including parcel, money order, mailing, investment, etc. to the people of this town and its adjacent small villages.

Comments / Discussion Board - About Kalagarh